So before I started writing this I did a Google and this petition came up, and is still live.

Glad that other hobbyists are as concerned as I am about the shocking proportion of wasted plastic that results from buying plastic kits from GW. Indeed, any kit from makers like Airfix and Tamiya. But in my estimation, GW are particularly at fault.

A couple of weeks ago I bought a box of new Sisters of Battle. Now don't get me wrong about my waste complaint, because I think these new SoB are truly fantastic. My next post will be a review of them and my plans for a battle diorama like no other.

But on the subject at hand, it splits me in two. The model are great, but there is so much leftover plastic! I want to weigh them (but can't), but at least a third is just sprue, in clean condition it can be ground up and melted again for the injection molding process.

Recycling is an appalling state in the UK. Some areas can recycle waste sprues, others can't. It would be a great move if GW can make some arrangements for hobbyists to bring their sprues to Games Day or Warhammer World.

Email ThisBlogThis!Share to TwitterShare to FacebookShare to Pinterest
Labels: Plastic

This is here purely so I can post the image somewhere else. Saves having to upload to some crappy image host. You may well be thinking it's a bit rubbish, which is fine, because I made it nearly 20 years ago and never stuck with digital art creation. Consider it an essay as I taught myself Photoshop. 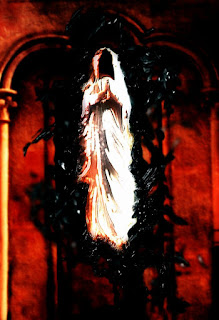 P.S. I am still deeply interested in miniature stuff. Just can't do any painting. This blog will return to life someday.
Posted by Exiztenzial at 14:38 1 comment: Links to this post

Been aaaaaages since my last but I'm still around and still interested in little plastic and metal men and thingies.

I thought I'd do a simple plug for this new store in Folkestone. I'd seen it weeks earlier, could see it was a really nice gaming shop. Yesterday I casually dropped in and got talking to the shop manager. I asked if there were any people who play Kingdom Death. Just a couple it turns out. That should change when the store receives its Kickstarter copy of Monster 1.5 (and its extensions). I offered my services to help build the tons of models that come with it.

Anyway, if you're into any and all sorts of gaming, card games, tabletop battles, old fashioned Monopoly, etc., then this is a great destination. This is a shop by gamers, for gamers.  I wondered how they could afford such a extravagant shop, loads of tables, and it seems this was planned for some time ago. CC is an internet business first, going for ten years, then the time was right to use its capital and make a gamers paradise.

Ohhhh dear, where has the time gone? Over two years since my last entry, two years of no hobby activity (aside from some purchases and a KS campaign or three.) The first year was an abstention through necessity (no time to spare, in other words), the second because model hobbies are all but impossible when living out of a suitcase. I should rename this blog: Diary of a Relapsed Painter!

Enthusiasts of Golden Age Citadel will know all about Nick Bibby. On many occasions I have wondered what he has been doing for the last 20 years, with little evidence of him on the internet. A few years ago I learnt that he has been dedicating himself to sculpting wildlife subjects, and eBay listings sometimes turn up these pre-painted cold castings of animal dioramas like wolves and eagles.

So what has changed? Turns out he is on Facebook. Not sure how long for, but I've been following him for over a year, maybe two. His work is nearly all about life-sized bronzes, and it is incredible stuff. As worthy of blogging as this all is, it pales next to the news of what he is now doing... 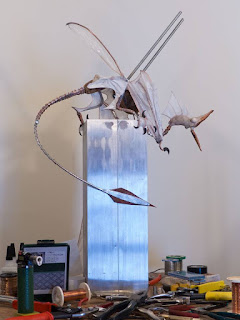 Yep. Its a dragon alright. I think this might be his first since the 90's. Waste no time and visit his FB page for more images. For the ardent hobbyist, he has described his method for building the wings. This is VERY interesting and one day I will apply this method to the Great Spined Dragon.


Posted by Exiztenzial at 14:01 No comments: Links to this post

16th May 2013
HellFire Promotion - for the rest of the month players of Hellfire can gain disciples (i.e. new players) and both get a special reward. If you have a tablet or phone and like the look of the game, I would really, really appreciate it if you added my game name (serotin) as your referrer.  http://moba.ge/GetHellFire

The game is based on obtaining and evolving cards, then using them in boss fights. Each card evolves from a basic Level 1 card by merging it with a duplicate, making a new card with higher stats and better art, which can then be reinforced with other, lesser cards (or food, as some call them). Cards are used in fights that have to be won to progress further into the basic game. And then there are the regular Raid events, and more recently Dungeons.

Art That I Like
I have been a fan of fantasy art since my schooldays in the 80's - my library is stuffed with books by artists such as usual long time suspects Vallejo, Frazetta, Whelen, Achilleos, Foss, Burns; to more recent names like Brom, Clint Langley, Paul Bonner, and not forgetting John Blanche for Citadel-philes. There is an ever growing number of artists producing great fantasy/sci-fi/concept art these days. So, this dedicated post is a placeholder for some of my favourite pieces from this game, and links to any art I can find on the interweb to share with fans.

There is a way more art than I can possibly put here at once, so these examples are some of my standout faves. 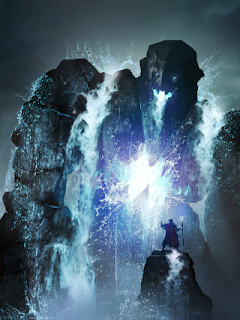 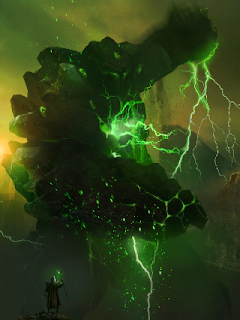 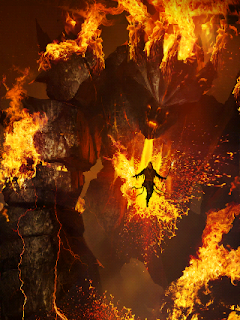 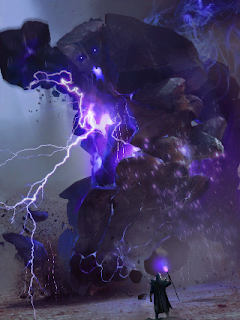 From clockwise: Earth Golem, Water Golem, Fire Golem, Death Golem.
The format of the game means that the artist is working to a small format, unlike print. If they were for print it would be equivalent to a traditional trading card size, like those produced by Fleer, for example.

Despite the small format, these kick ass and I would love to know who the artist is. The green Earth Golem is pick of the bunch (and to be honest, is very reminiscent of a Space Marine), Death Golem is close second. The low resolution captures of my antique iPod don't do them justice. I just love the feeling of power in them. 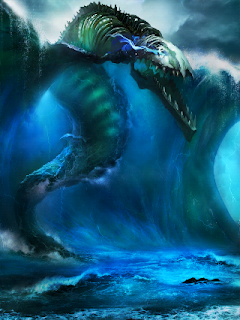 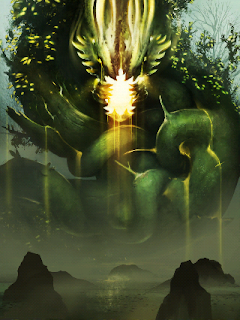 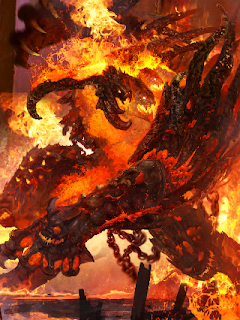 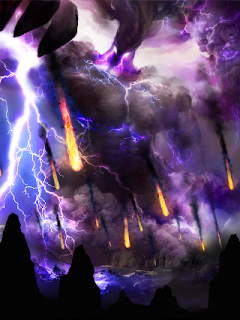 Another awesome bunch. These are ubiquitous in the game. Advanced players will know that they kick hard.
Clockwise: Djinn of Growth, Djinn of Vapour, Djinn of Flame, Djinn of Ire. 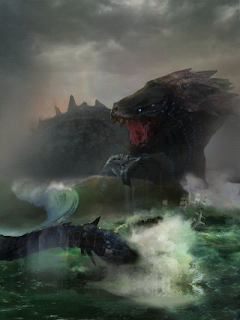 Designated a 'Super Rare' card, I think this was the image sealed it for me (this was during the first War of the Mages). It feels so epic. It reminds me of Victorian era art, but I can't put my finger on what or who, and my memory could be playing me false. Will visit the National Gallery for research some day. 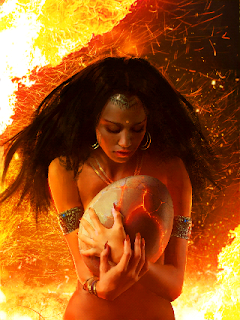 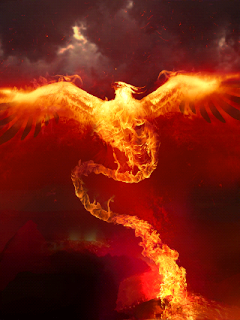 Simply beautiful. The artist uses a lot of photo manipulation, taking real landscape photos and turning them into atmospheric backdrops, or possibly using landscape generators like Vue, and in the first card photographing a life model and digitally painting her. I think there are specialist Photoshop plugins that can produce flames. 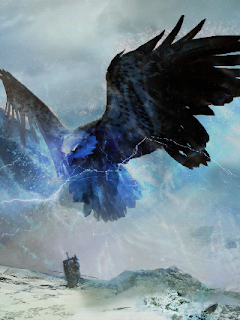 Have to wonder about the tiny figure that looks like it has a staff and a pointy hat.


War of the Roses 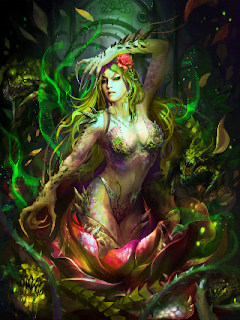 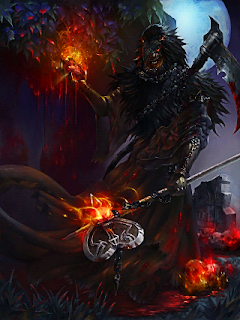 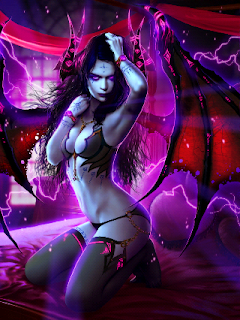 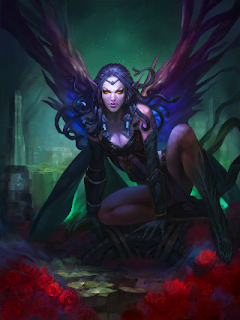 Clockwise: Jealousy, Wrath,  Scorn, Ecstasy. What has been very apparent to me is the direction HellFire has taken, going away from massively implausible monsters that feature in many of the first wave of cards (like those in Rage of Bahamut for example) to encompass old world gods and fairy tales.

Exiztenzial
Kent, United Kingdom
Creativo (borrowing an Italian word recently used by Dave McKean) because I use lots of different artistic media - digital or material, its all the same to me. Reader of books. Wearer of shoes. Philosopher pondering Space, Time and Consciousness. More recently, developing two forms of technology that can have an important impact on humanity's expansion into space.